The Barbican Estate At 50

The Barbican Estate At 50 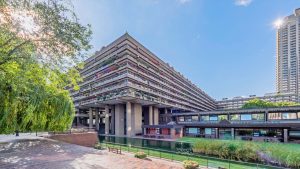 2019 marks a very special birthday for one of London’s truly iconic, if underappreciated, works of architecture. We are, of course, talking about the stunning Barbican Estate. While Britain had been victorious in the Second World War, in the capital, London, you would have struggled to tell. Much of the original City of London had been razed to the ground during repeated aerial bombardments and was desperately in need of reconstruction.

In 1957 the decision to build a brand new estate on the former ward of Cripplegate was taken. 35 acres (the eventual project would actually use 40) were given to the project which took 11 years (1965 to 1976) to complete. The architects Chamberlin, Powell and Bon were tasked with creating the estate after their groundbreaking work on the nearby Golden Lane Estate. Their utopian, brutalist design was not without criticism; the design was ahead of its time and divides opinion to this day. The estate officially opened in 1969, though building work and improvements continued for years.

As well as being aesthetically pleasing with its wide-open spaces, stunning water features and intriguing architecture, the estate was also designed with its inhabitants in mind. Features such as a launderette, a nursery, one of London’s largest libraries and even a supermarket meant that the estate’s inhabitants had a great range of amenities on their doorstep which allowed them to have a better quality of life than was available in much of the rest of the city. Indeed the addition of a nursery encouraged the possibility of both parents going out to work, which was the dawn of a new world indeed, and somewhat rare before this point.

Due to its relatively high cost of rent (set by the City of London), the estate had always been inhabited by the city’s high earners. Today, the estate features many privately owned properties (the Right To Buy Act of 1980 meant that many former council-owned properties were sold) and is no longer under rent controls. This means that the Barbican Estate, as one of London’s iconic pieces of architecture, is priced at the higher end of the capital’s property market, but there are added benefits such as built-in heating that is free for the residents. There is also its location – being so close to the City of London means that many of its residents have very short commutes, saving them money.

The estate has been home to many who work in the city’s financial district and even some MPs. Today, the diverse nature of London is reflected in the estate’s inhabitants. Though priced at the upper end of the market, the estate is home to inhabitants from across the globe and has families of all shapes and sizes living there due to the close proximity of nurseries and schools. Also, somewhat out of keeping with the rest of London, there is a palpable sense of community that can only be fostered by people living in such close proximity and in such a beautiful setting.

The amazing thing about the Barbican Estate is that as the world changes around it, it has kept its appeal. This really is a testament to the quality and ingenuity of the original design. With the design being so far ahead of its time, it has taken the rest of London 50 years to catch up! The estate now sits within one of London’s most desirable areas, this certainly wasn’t the case when it was built. This, you have to say, is an incredible testament, as the development of the estate certainly appears to have positively affected the development of the area around it.

The estate still has some fantastic amenities to this day including its own school, a church, a launderette, a nursery and the iconic Barbican cultural centre. All of this, as well as the incredibly well-kept gardens, a children’s playground and of course the iconic lake, means that to this day, the Barbican Estate is still one of London’s best places to live.

So, here at AW Childs, we salute the Barbican Estate on its half-century. With the estate based on our doorstep, we have years of experience helping people to move into this iconic piece of London’s architectural heritage, and hope that it will continue to grow in popularity as more and more people appreciate the quality and unique living experience that the Barbican Estate provides, 50 years after its groundbreaking inception.